We are sharing a story written by Scott Buxton on a man who has had a stroke at the salon sink.

A man in England has hit the headlines after having a stroke said to be triggered after a visit to his hair salon.

Beauty Parlour Stroke Syndrome (BPS) or vertebrobasilar insufficiency (VBI) is an uncommon event which can cause a transient ischemic attack (TIA) or stroke (CVE). The prolonged hyperextension and or rotation of a persons neck whilst over a wash basin can cause a TIA or CVE through two proposed mechanisms – mechanical occlusion or arterial dissection. Both are uncommon and typically only seen in those with a connective tissue disorder or are vascularly compromised through atherosclerosis, diabetes or anatomical variations so don’t go cancelling you hair appointments just yet.

The arteries in this case are the vertebral arteries. Both arise from the subclavian arteries on each side of your neck and enter deep to the transverse process at C6 and progress upwards through the tunnels of the transverse foramen the atlas. Once here they travel through the much bigger foramen magnum where the two sides join to form the basilar artery. The basilar arter has a few smaller connecting arteries but ultimately it joins The Circle of Willis. 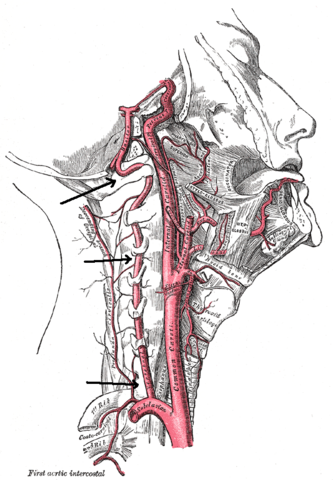 ood flow from the vertebral arteries supplies blood to the muscles in the anterior part of the neck, the posterior parts of the brain and the cerebellum. Hence why the majority of symptoms of BPS are vertigo, nystagmus, ataxia, slurred speech, wernike’s aphasia or drop attacks.

The artery is mostly outside of the skull and due to its position in the neck it has to be highly mobile due to rotational movements of the head. Therefore it is vulnerable to occlusion and trauma as seen in BPS. Ultimately this injury is much more likely to occur in something like bungee jumping or in road traffic collisions. As they aren’t as innocuous as getting your hair cut they don’t get the same coverage but the mechanism is still the same.

It is likely that many physical therapists will be approached by patients about this happening to them. Advice for those who are vulnerable or worried about this unlikely event occurring would be to avoid the compromising position of hyperextension and rotation for too long, to use a cushion or rolled up towel at the basin to reduce the total amount of extension or to slowly move your head into the position and to avoid a retching motion.